we’re headed to Colorado, Arizona, New Mexico and Texas y’all. and so so excited!

CP is spending October on the East Coast!

March TOUR dates with Wilderness! Come on out!

thanks to KZME for a great review of our CD Release!

“On October 4, I had the pleasure to meet the three lovely individuals that make up The Cabin Project:  Katie, Adam and Zanny. The band came out to 1071 FM KZME to chat with James Dineen, host of Friday’s The Lunch Box, about their new CD, Heliotrope. The project was funded by a call for support put out by the band. You can hear the KZME interview and in studio performance

Audio clip: Adobe Flash Player (version 9 or above) is required to play this audio clip. Download the latest version here. You also need to have JavaScript enabled in your browser.

I was immediately struck by how nice all there of them are.  I mean, all the folks who come out to visit with us are nice, but these three were so nice I wanted to ask them if I could join the band and be their new best friend. 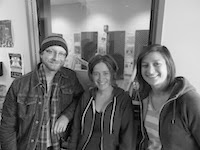 I attended the CD release show at Mississippi Studios later that night and what a party it was!  It was clear that I was not the only one who felt all warm and fuzzy to share in the band’s celebration of releasing their second album.  Fans, like myself, fed off the great energy coming off the stage as the band performed songs off of their new album and no one wanted them to stop playing.  Don’t you just love it when that happens at a show?

Heliotrope is a never-ending magical journey lead by what feels like a village of people who just know where we are headed.  You can clearly feel the majesty and the down home connection between the words, the music and the music makers. Purchase the CD and listen to it during a blustery Pacific Northwest winter day or during a summer drive to the beach.  You will feel better.  Promise.”

Heliotrope is out now

The new record is officially available for Download on ITUNES

“Heliotrope is the second album from the Cabin Project, the Portland group that describes itself as “orchestral indie pop from the Pacific Northwest.” This phrase evokes the sound of the majestic Heliotrope perfectly; it’s a record whose prettiness is vast and rainy and windswept, and rooted in what seems like a small and sturdy community.”

No shows booked at the moment.